ZOE CON 2020 April 24 & 25! Come join us for a FREE Virtual Con experience for movies, shows, gaming, and general nerdery! The fine folks at The Fantasy Network, ZOE, and DG are doing some very cool things with an all virtual fandom convention.

Hooray! JourneyQuest season 3 is an official selection for both Seattle WebFest and Vanounver WebFest! If you’re in the area for either of these fests, make sure you catch our showings. And congrats to all the other participants… check out all the selected shows at Seattle WebFest 2017 and Vancouver WebFest 2017.

And, hey, the new poster looks pretty dang incredible too! (Have I mentioned how much I love my costumes in season 3?)

JourneyQuest is a fantasy-comedy web-series, and a production of Zombie Orpheus Entertainment, Dead Gentlemen Productions, and thousands of crowd-funding-fans. Emilie plays Wren Birdsong in all three seasons of JourneyQuest, a well-intended bardic graduate student on the trail of her first Epic. Watch seasons 1 & 2 of JourneyQuest on YouTube.

My imperfect offering this morning, held up in thanks to another lost voice.
It was written several years back as a kind of meditation inspired by Cohen’s “Anthem.”
Ring the bells. Let the light in.

Just got back from my first time at Gen Con!**
… well… I got back a week ago, but I’m still recovering from the whirlwind. And eating as many vegetables as I can.

I went to work the booth, promote upcoming projects, and generally hang with fans of Dead Gentlemen and Zombie Orpheus Entertainment, the production companies comprised of people I love, who employ me to make things I love. Most notably, JOURNEYQUEST (season 3 filmed last March and is coming in December)!

Like I said, this was my first year, and it was also the husband’s first time back in 10 years. It was definitely a homecoming of sorts for him, promoting our recently funded new The Gamers web-series that continues a story that started 15 years ago (15 years!) when he played Rogar the Barbarian.

The days were long working the booth, and frankly the Exhibition Hall was so stuffed with gaming wonders it was easy to be overwhelmed, but I had a fantastic time! I got to spend hours with some of my favorite people I never see, I got to meet dozens of our incredible fans who have so generously kept our projects afloat for so long, I sat in on a fun, funny, super-creative reading/workshop of a pilot script, I drank my fair share of gin & tonics, I attended screenings of Attacking the Darkness and live improv from Hat Trick Pony and watched the fantastic reactions of our target audiences, I marveled at the clever cosplayers, I caught SO MANY POKEMON, and I even played my second RPG with some awesome (and very patient) fans.

My favorite personal encounter by far at the con was when a gentleman approached me and asked if I had a spare second to send a video “Congratulations!” to his daughter. She’s 18, just got her first film she wrote and directed in a state fair competition, and is headed to study film in college– and she decided she wanted to make films because of watching JourneyQuest. Doesn’t get better than that.

Thanks for a crazy, fun, hectic, nerdery-filled weekend, Gen Con!

“In the Shadow’s Lair”

Catching pokemon For my daughter… 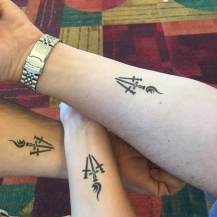 Brotherhood of the Celestial Torch 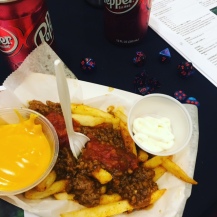 Christmas at the Con!

Here there be dragons

This train is really behind schedule.

**Psst! For the uninitiated, Gen Con is a HUGE gaming convention that takes over what seems like the entirety of downtown Indianapolis each year for table-top, card, video, RPG, and every other kind of games, with tournaments, symposiums, and every conceivable associated accessory or activity. (phew)

Hi, my name is Emilie, and I’m not a funny person.
See, there are funny people and there are those of us who are surrounded BY funny people.

We, the unfunny, we have other qualities. Smart, maybe. Amusing and good conversationalists, check and check. Most of us learn very early to be connoisseurs of punchlines, and we are excellent straight-men. But somehow, we are still the ones whose jokes at the party are much funnier when someone else delivers them… 30 seconds later and more loudly. And most of the time, we don’t mind our perpetual unfunniness. Because we like funny, and we seek out the funny people, and frankly — like everyone else, funny or un — we also just love to laugh.

What if we, the comedically stunted, DISCOVERED our funny? Think about it. What if you got the chance to test drive funny like a shiny new Camaro, for a day, a week? Could you uncover something uniquely you, deep in your unfunny being you had forgotten or discounted or just flat-out ignored? Could you mine some unknown internal wealth of funny for actual… LAUGHS?

I say you can, unfunny friends. I say we all can.

Read the rest at medium.com!